I love my dog Jackson! 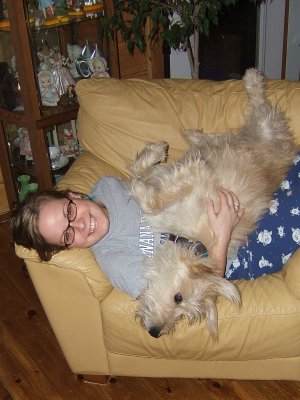 Just in case you forgot... I have the best dog in the entire world! Well, he's actually quite bad sometimes, has no manners, doesn't listen to a word I say, and brings back dead animals every time he goes outside. That being said, I'm still obsessed with him.
Posted by Emily at 11:43 PM 1 comment:

Sorry there haven't been any updates in a while! I blame my mom! It's not like she has anything else to do besides write these updates (yeah right). Before I spoil the good news, I just want to personally thank all of you for all of your support. I can honestly say this battle has been one of the most difficult things I've ever been through. I don't know what I would have done without all of you and your continued support. One of the most difficult parts of this struggle was being away from home last March when I first found out and even this fall when I came back to school. When all I wanted to do was be home -and then when I was home and didn't want to be there either ha ha- each of you helped in some way to keep me going (and I know at times it wasn't pretty)! Anyway, I know that many people faced with these situations don't get to give updates like this with such great news and I don't take for granted how lucky my family is! Thanks again for everything! I couldn't have done it without you!

Here's what my mom wrote:

First of all, I would like to apologize for not keeping you all up to date. My excuses are that we were having too much fun on vacation, and when we got back, I was too behind at work! Mark is now classified as a "complete responder" to his long and arduous treatment over the last 8 months. That designation means that there is no evidence of metastatic disease in his body, and that if he has no recurrence in the next year, he will have an even better prognosis. Considering that only three patients out of 100 are total responders, Mark is in a pretty good place right now! The oncologist said that Mark would have probably only lived six months after his
diagnosis last March if he had not responded to the treatment. That six-month survival estimate was agreed upon by the entire "Tumor Board" at the James Hospital, so we cannot take lightly the fact that Mark would have passed away before Christmas without all the help from researchers, doctors and nurses at the James Cancer Center.


WE ARE SO HAPPY and THANKFUL and JOYFUL!! 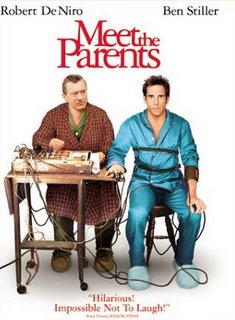 There have been a few requests for a new blog to be written about my experience meeting Pat's parents. Although it was an experience I would like to forget, I've decided to rehash the night anyway in hopes that it might make at least one person laugh. So, if you are in fact that one person that this makes laugh (or you feel like lying and say that it made you laugh even if it really didn't) leave a comment and let me know.

It all started with me going to Strongsville on New Year's Eve to take the GRE for grad school. [Disclaimer: I do not wish this test on my worst enemy, well maybe someone I really hate like... anyway, you get the idea]. The test took me 3 1/2 hours and I was in a little room the size of a cubicle with about 5 other people taking tests too. The first five minutes went okay until I started hearing someone clearing the phlegm in their throat. If I could insert a sound here, I would. It was a sound you had to hear to completely understand. Instead, I'll insert a picture that describes the sound.

Well, this noise continued to occur every 3 minutes or so for about half of the test. Finally, the woman who I was convinced was guilty of coughing up her lungs finished her test and left. Within seconds after the door closed behind her, I heard the noise again. Turns out it was the man sitting diagonal from me and he continued to make the noise for the rest of my test. Not only was I frustrated that I didn't know a single question on the exam, but this man's noises made me want to pull my hair out. Despite my distraction, I finally finished the test. 2 out of the 3 parts of the exam instantly gave me my scores after I finished. I received a 400 and a 590. Not too bad right? That's what I thought...until the man told me on my way out the door that each portion was out of 800. WOW... I felt like an idiot. Needless to say, when Pat picked me up I was in a terrible mood. Within 10 minutes I was at his house to meet his entire family for the first time. Not good timing. I realize I'm rambling and this is really long already, so I'm going to try and make the rest as simple as I can.

To make a long story short, Pat's Dad intimidated the crap out of me. I tried to talk "ref" talk since I knew he ref's basketball games just like my dad does. That didn't go over well as he told me how much easier it is to ref varsity games (what my dad does) than JV games (what he does). Okay... moving on. Next subject please. Then Pat and I played his parents in euchre. First I was partners with his mom. We lost. Then I was partners with Pat. We won. In my head, I was thinking, "Wow. That sucks, the only person who lost both games was Pat's mom." After it was too late, I realized I had said that out loud to his mom. She told me she didn't understand what I meant (giving me a chance to back out of the comment and make something up that I had said...but that would be too easy). Instead, I proceeded to explain further the fact that I had won the second game, not her and therefore she was the only person to lose both times. Nice Emily. Next subject... what Pat's parents had to be thinking..."So Emily, you're a communication major? We can tell. You seem to communicate so well..." Finally, later that night (approx. 3:30am) I was walking around Pat's house (a bit intoxicated... okay, a lot intoxicated) and instead of walking into the bathroom, I walked right into his parents bedroom, turned on the lights and kept walking in. Next thing I knew, his dad's head popped up and he said "Emily? Are you lost?" I was pretty drunk and I don't remember much. In fact, it felt like a dream. Well actually, more like a nightmare until the next morning when Pat confirmed that it had actually happened. His mom had already confronted him about it. She yelled at Pat and said "did you not show Emily where the bathroom was?" Pat could have then covered for me and said, well actually, no I didn't mom. Instead he said "yes mom. She knew where the bathroom was, she got ready for the night in the bathroom." Thanks Pat.
Posted by Emily at 1:34 PM 1 comment: