'Tis the Season...to bet on sports

The 06-07 College Football Bowl Contest, Pat vs. Emily part II has begun. If you refer back to a post I made last February, you will be reminded of last year's outcome. I did in fact lose the battle and had to make Pat dinner, cookies, and stay a night in his terribly dirty house filled with seven boys. Pat's bet is quite similar to last year's. If I lose, I have to cook him dinner again with dessert. The good news for me is that he no longer lives in a dirty house with seven dirty boys to bribe me with. Therefore the bet ends with dinner. With that in mind, the stakes aren't quite as high this year which is why I couldn't get away with the same bet I made last year. I was hoping to get one more shot at spending an evening with Pat scrapbooking and watching Sex and the City, but he refused to let me pick that option. He claims it's because it's not a fair bet since my stakes are so low and his would be so high. But if you want my honest opinion, he's scared. Last year going in to this battle, Pat had never bet sports with me and had no reason to fear me. He had no doubt in his mind that he was going to get a free meal out of it and that scrapbooking wouldn't even be an option. He was right. He beat me by a landslide. It was March Madness however, that really threw him for a loop. Not only did my bracket beat Pat's bracket last year, but my bracket beat everyone who submitted a bracket to the BGNews poll. Please don't mistake this for bragging. You and I both know me winning had absolutely nothing to do with skill or sports knowledge and everything to do with pure luck. My point is, it got Pat scared and with good reason. He now realizes that his well thought out decisions based on knowledge of the sport and awareness about each team can easily be beat by someone who knows nothing about the teams and just guesses. With Brigham Young's win (my pick) over Oregon (Pat's pick) last night, I think Pat has every reason to worry! Let the battle begin...
Posted by Emily at 11:13 AM 1 comment: 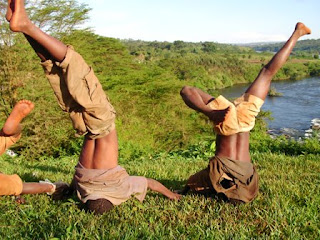 Exuberant. That's the word of the day. It's the word that best describes the way I feel to be done with my first semester of grad school. According to my good friend, the Merriam-Webster dictionary, exuberant means: joyously unrestrained and enthusiastic. According to my other good friend, google images, exuberant is best illustrated by the image to your left. Grades were posted tonight at midnight, marking the official end of the semester. Technically I've been done for about a week now and I couldn't figure out why I still felt stressed, as if I wasn't done. After the grades were posted tonight, I instantly felt relief. It's almost like a rite of passage, viewing the grades online to mark the end of the semester. After my previous 4 years of remaining stressed until I see my grades in writing, I've become accustomed to this symbolic act. I'm proud to say that I earned straight A's this semester. That being said, I'm not quite sure how I did it. Words can't explain how happy I am to have the semester under my belt. I also can't put into words how much I don't want to go back! No, I'm being dramatic. I can handle it. Just like The Little Engine That Could, if I keep telling myself I can handle it, I will. I think I can, I think I can, I think I can. In the spirit of the holiday season, my next order of business is to complain about incompetent people. Call me the Grinch, call me what you will, but I have some serious issues with Capital One right now and all other big corporations who have thousands of customer service representatives and zero customer service. Correct me if I'm wrong, but it's the year 2006. A time when we use this great new technology called computers. Why is it then, that for the past month every time I call, which is unfortunately about once a week, no one has any idea when I last called, why I called and who I spoke to? All I've been trying to do is get someone from Capital One to send me a credit card so that I can increase my debt and let them rob me with their overly priced interest charges. Is this too much to ask? Since I haven't yet received the card that I needed to buy Christmas gifts with, I'm now increasing my debt with Capital Rich. His interest charges are much more reasonable. I explained to the last person I spoke with from Capital One that they had lost my business and I would be closing my account. This lady was ironically the first person I've spoken to who spoke fluent English. This is not to say that I have a problem with international workers because I don't. I do however, believe the language barrier has been a huge part of the problem dealing with their customer service. All of my calls to Capital One took at least 3o minutes, most of them more. Imagine trying to give the email address: emilyls@bgnet.bgsu.edu to someone who barely speaks English. I think I repeated the email address at least 50 times trying to use a word for each letter. E as in EXHAUSTED with this whole process, M as in MAD as hell, I as in INCOMPETENT workers...you get the idea. So next time you see a Capital One commercial asking "What's in your wallet?", remember why Capital One will NOT be in my wallet anymore. Their customer service sucks. Plain and simple. MERRY CHRISTMAS! :)
Posted by Emily at 11:48 PM 1 comment: