Not just another shooting

I usually turn off the TV after the 10:30 episode of the Wonder Years comes to an end but for some reason tonight I decided to watch the news. Big mistake. A teenage boy was shot four times in a parking lot where I grocery shop. The Cleveland news has an entirely different impact on me here than it did when I would watch it at home. I used to be able to brush things off thinking it doesn't effect me but now that I live here, it's not just another shooting to me. It's a reality of the new world I live in; one that I'm not quite comfortable with. This is "only" one of two shootings that I know of in Lakewood in the last few months. I hesitate to say only because two shootings is still two too many if you ask me. Of course it's a much smaller number than Cleveland shootings but that isn't really comforting to me. Pat assures me that both of the recent shootings were isolated incidents, domestic disputes or personal grudges. That doesn't really comfort me either. Shelby is guilty of many things, but shooting and killing people isn't typically one of them. I talked a big talk about getting out of the small town life but now I'm questioning whether I am really cut out for this.
Posted by Emily at 11:09 PM No comments:

It's a cat thing...you wouldn't understand 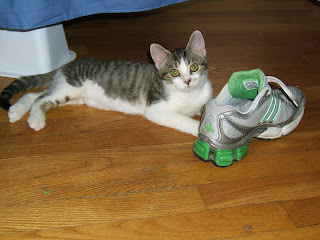 For those of you from the very large population of people who hate cats, please don't bother reading any further. I've had about all of the negative feedback regarding the new addition to my family that I can stomach. When the day comes that I feel minorities and homosexuals are being treated equally, you better watch out because my next activism movement is going to be: All pets are created equal. You don't have to be a cat person to appreciate the important role they play in other people's lives. Before I get carried away ranting and raving about the negative attitudes in this society toward cats, let me focus on the real issue at hand. I for one, am a cat lover. I'm a firm believer that like dogs, cats too can provide companionship. Yes, each play a different role in our lives, but in my mind there is no hierarchy of pets. One of the things I missed most during my college days was my ability to be around my pets. Now that I'm living by myself in an apartment that allows animals, I'm finally able to get a pet of my own. Last Saturday I rescued a kitten, Sadie May. 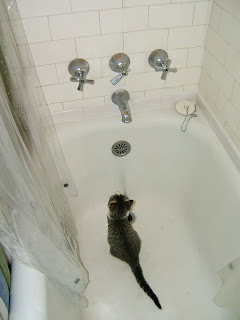 Again, no negative feedback about the name of my cat is necessary. I've also had enough of that too! I now appreciate the difficulty my sister experienced when people disagreed with every name she chose for her son. Although my kitten has many less than endearing qualities such as destroying every aspect of my apartment that she can and her stinky smelling butt, I have to say that I've noticed a huge difference since I got her. Before getting Sadie, whenever I was alone in my apartment I was constantly scared about being alone and whether or not I was safe in my apartment and neighborhood. Now that I have Sadie I don't really feel alone anymore. She follows me all around the apartment. Of course, sometimes she scares me more when she knocks things over at night and makes extremely loud noises but I guess you have to take the good with the bad. She isn't a gray cat like I wanted and she doesn't really sit on my lap much like I had hoped she would, but she does provide me with a sense of companionship in my new journey and perhaps that's the most important thing she could do.
Posted by Emily at 7:14 PM No comments: 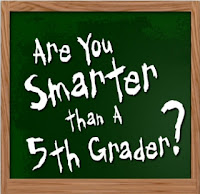 Let me start by saying, if you relied on the television show "Are You Smarter Than a 5th Grader" to indicate whether or not our school systems are successfully teaching our youth, you might be misled into believing they are and that No Child Left Behind actually worked! I give them credit, these kids are smart! But I am a bit cynical when watching the show. First of all, I think they picked the most elite of all 5th graders known to man. They are all probably students from the gifted and talented programs who have tested out of grades 5-12. Most of them are probably receiving college credit already. I will admit, I may be a little bitter because these kids continue to outsmart me week after week. However, I believe knowledge is somewhat like a vacation day at work. You either use it or you lose it. There comes a time in your life when nothing, absolutely nothing requires you to know where the first Inca civilization was located or the name of the ship that brought the pilgrims here. I wonder...after this knowledge is no longer being beaten into these 5th graders heads....how much will they really know?

Am I at age 24 smarter than these kids in 5th grade? No. Was I in 5th grade as smart as these 5th graders? Probably not. Am I at age 24 smarter than these 5th graders will be at age 24? Maybe! Those little sponges can only absorb for so long. Soon these children will realize that at age 24 knowing trivial things such as whether or not the ostrich is the fastest bird, is useless unless you're on game show or by chance actually being chased by one. After they come to this realization these children will then divert their attention elsewhere and learn more important things like what "No Stopping During Rush Hour" signs mean. So I challenge you little 5th graders. Come see me in 12 years and then we'll see how smart you are. I'm willing to put money on the fact that the cops in Lakewood won't care if you can tell them the largest country in South America. You will still get a ticket if you park in a No Stopping zone.
Posted by Emily at 3:45 PM No comments:

Missing where I come from...

On my way to work this morning, the DJ's on Q104 (my new favorite radio station in my new home) were asking their Cleveland listeners to call in and tell them something they miss from their hometowns. I found the topic somewhat ironic as I am spending my first week in my new apartment in my new city. As listeners were explaining trivial things they miss such as candy and pizza, I started thinking about really important things that I miss about my previous home: 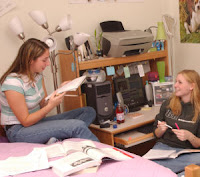 1. Roommates: I never thought I'd be saying this since I was so eager to get out there and be on my own but I really do miss having roommates. I've spent the past 24 years with roommates and I really took it for granted. I felt so much safer knowing someone else was in the house or apartment and it was nice to have someone to talk to.

2. Knowing my way around: It's hard for me to remember what it was like in Bowling Green before I knew my way around. It's been a period of adjustment for me lately in my new city. I know how to get to about three places. My apartment, my boyfriend's apartment, and work. I guess they're the three most crucial locations for me to know at this point but I'm really looking forward to the day when someone asks me how to get somewhere in Lakewood and I can actually give them an answer.
3. Turn signals: I miss people using their turn signals when weaving in and out of the lanes around you. Driving is much more enjoyable when these features are utilized. Now that we're on the topic, a little common sense when driving would be nice too but I don't think they have that where I come from either.

4. My sister: Wow... I honestly never imagined myself saying this one either. I really do miss her though. She was in Shelby with me most of my life and then only 20 minutes away in Toledo for my five year duration at Bowling Green. It was really comforting knowing that she was so close and she really is one of my closest friends. 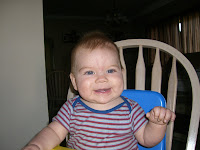 5. My nephew: Boy was I spoiled for the first 6 months of his life. I got to see him every week if not more. Now I think I'll be lucky if I get to see him every month! I'm going to be the Aunt that he knows he has, but doesn't know what she looks like. That makes me really sad. I love that little boy more than I thought possible.

6. My family: The reality is, I've actually moved closer to my family than I was in Bowling Green but for some reason I feel so far away. Maybe it's because I'm so unfamiliar with my surroundings or maybe it's just because I feel so isolated from everyone here.

7. Feeling safe: I'm sure this comes hand in hand with not being aware of your surroundings but I miss feeling safe. When it comes to city life, I've lived a pretty sheltered life. Shelby, Butler, Bellville, and Bowling Green aren't exactly big cities. It's a whole new ballgame here and I'm not sure I know the rules.

8. Properly marked street signs: Bowling Green was known for their ridiculous parking situations. But looking back, it wasn't that bad. Sure the rules were strict and heavily enforced, but at least they made the rules clear. If you weren't supposed to park somewhere, they put up sings that said: NO PARKING. It's as easy as that. Not Lakewood, however. Lakewood prefers to use signs that are open to interpretation. Instead of saying No parking, they would rather say No Stopping and let you figure out what that means. I for one thought it simply meant, don't stop to turn or parallel park. When I went to leave for work the next day and realized my car had been towed, I found out I had interpreted the meaning incorrectly. $125 later and 3 hours late to work, I now know what "No Stopping during rush hour" means.

When thinking about what I miss from home, these are just a few that came to mind. What I don't miss, however, is my boyfriend whom I now get to see everyday. I don't miss being in a long distance relationship for the past year and four months, and despite the harshness of waking up at 6:30am for my "real world job," I don't miss grad school either. And obviously, I don't miss complaining because I'm still quite good at that. :)
Posted by Emily at 5:25 PM 1 comment: