Graham was born a month ago. I cannot believe it. The good news is, we're all still alive. But I have no idea where the last five weeks went. Time is going by so quickly and it probably will never slow down. Next thing you know Graham will be getting married and having his own kids. Okay, I'm getting ahead of myself. But seriously, time is flying by!

The days fly by, too. I feel like I blink and it's time for Pat to come home from work already (and usually this is when I realize that I haven't brushed my teeth or showered all day).

But finally I can say I’m feeling like I might be STARTING to get the hang of this whole parenting thing. And my energy is back which is great. Now I just feel the normal exhaustion that all new parents feel from being sleep deprived (will I ever sleep eight hours in a row again? EVER? What about 4? Or 5? Or 6? Or 7?).

We might actually be getting on a little bit of a routine, too. And by routine I mean I am a slave to my son and he calls all the shots but he is starting to be a little bit more consistent with his demands.

The boy knows what he wants and that is (in order of priority) to eat, be held and to sleep. Preferably he would like to combine 2 and 3 and be held while he sleeps. And if he doesn’t get what he wants, his little Irish temper (which he does not get from me, by the way) kicks in and he lets you know he is not happy.

As Graham and I are still getting to know one another, I am slowly catching on to some of his mannerisms and I'm actually very lucky to have learned that he does about 20-30 minutes worth of "warning grunts" in his sleep before he wakes up.

This works to my advantage because when I hear those grunts, I either jump out of bed to pump before he wakes up or I run to the kitchen to prepare myself a quick meal or any other last minute things I really need to get done before he wakes up.

Since I am not able to breastfeed...yet (still not giving up hope), I am pumping my milk and feeding him by bottles (AKA exclusively pumping or EPing). He eats every 2 1/2-3 hours and I pump every 2 1/2-3 hours. Doing both of these things leaves me little time during the day to do much of anything else.

So how do I have time to blog, you might ask. Let me introduce you to a little thing called a hands free pumping bra. This item is LIFE CHANGING for those who pump. I pump anywhere between 6-8 times a day for twenty minutes at a time (except during power pumps which last for an hour. It's like a new kind of power hour except without the fun music and alcoholic beverages).

That is a total of two to three hours I spend pumping each day. Instead of sitting there holding the pumps, the hands free bra lets me turn that time into productive time. In fact, I am wearing the hands free pumping bra right now while typing this.

How I define "productive time" is another story. Sometimes I spend it writing thank you notes, catching up on work emails, reading the plethora of baby books I have or even blogging. But most of the time, I spend it on facebook or playing games on my phone. But it makes the time go by faster, nonetheless.

I have learned many things over the last five weeks, some of which are making my life as a mom easier now that I'm aware. For example, I have learned that it is important for me to pump BEFORE the baby wakes up. Otherwise, I try to lay him down for a nap and start pumping and like clockwork, he wakes up crying while I am attached to a machine. This leaves me with the choice of either stopping pumping and not having milk for his next bottle or just letting him cry. Either way, it's a helpless feeling.

So if I can stay ahead of his eating schedule, life is much less complicated. Although, there was a time when I couldn't listen to him cry anymore while I was pumping so I turned off the pump, disconnected myself, picked him up, warmed up a bottle, returned to the machine and hooked myself back up to pump and bottle feed him while pumping. How is that for multitasking? It can be done but it is less than ideal and quite tricky.

Another thing I have learned since becoming a mom is that all boob modesty goes out the window when you start breast feeding or pumping. I think anyone who has come to my house in the last month has probably seen my boobs. (Disclaimer - I do have a small amount of dignity left and do cover up when males other than my husband and son are present).

I have also learned, and am rediscovering this every single day, that new moms get LOTS of advice. Some of it solicited and most of it not. Some from friends and family, some from doctors and some from your own research on the internet and in books.

And almost every single piece of advice you receive is contradictory. Trying to sort through all of this advice and decide what is best for our life and our baby has been one of the most difficult parts of being a parent so far.

Even if you talk to your friends about what their pediatrician recommends, all doctors say different things too. It's nuts and can leave parents feeling completely overwhelmed.

I don't really have a solution to this yet, but we are just trying to figure it out as we go. And we still have a lot to learn!

Other important milestones during the first month:

Our dog Grady, who hasn't swallowed any human items in over a year and a half (if you were unaware of this habit of his, read more about it here and here and here and here), had a small relapse and swallowed one of Graham's bibs. He would have gotten away with it except he left behind one of the snaps as a piece of evidence.

Then Hurricane Sandy came rolling through and it rained for an entire week straight. And for that entire week, Grady was trying to pass the bib and needed to go outside like ten times a day and spent what felt like hours out there at a time pacing back and forth in the rain trying to poop out the bib.

So when I wasn't pumping or feeding the baby, I was drying off our wet dog. Don't worry - he did pass the bib, as you can see to your left.

I got introduced to a little thing we like to call projectile spit up. You might think this is something that only happens in the exorcist but even my cute little baby can shoot spit up across the kitchen floor (it happened and there were witnesses).

On a positive note, when I get spit up all over me, this forces me to make time for a shower so I guess we all win. Except on the days when I have just showered and get spit up in my clean, wet hair. And yes, that has happened, too.

The Baby Bijorn is great. I will admit, the first time I wore it around the house, I felt a little silly like I was straight out of the movie The Hangover. But it does make life easier being able to keep Graham close and he feels like he's being held and I still have my hands free. The problem is, I usually try to do this while I'm eating lunch and then I end up eating over his head..not a good idea with hot food.

And finally, here is a look at our growing baby boy. 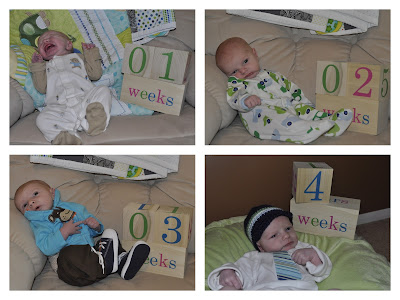 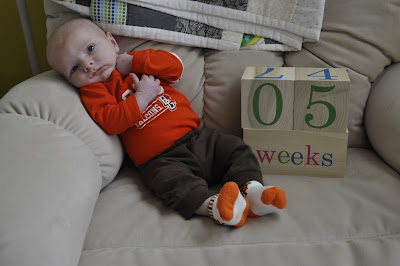