Tragedy in a mother's eyes

The motions were all the same with Graham's bedtime routine last night. I rocked him, we read a book, I kissed him goodnight and I put him to bed. The motions were the same, but the emotions I felt while doing it were different.

The devastating tornadoes that ripped through Oklahoma yesterday hit me much harder than I would have expected. It is so true what they say. Your perspective on everything in life is different after you become a parent.

This is not to say that before becoming a parent I wouldn't have been sad about the lives lost. I absolutely would have. But the report I heard about the elementary school that was completely destroyed and the students in grades kindergarten through third grade that were unaccounted for at the time of the report left me feeling completely overwhelmed with sadness.

The first thing I thought about was how horrific it must have been for the parents of those children. To arrive to scene of total wreckage where just hours before a school existed. A school where they dropped their students off like any other day.

The reporter said they were keeping the parents outside of the caution tape so the search and rescue team would be more successful in hearing the cries for help. How terrifying and helpless that must have been for the parents. I felt a level of empathy I never could have felt before becoming a parent myself.

I learned at a young age that life can be taken from you in an instant. But sometimes I think I still get complacent. Even though I've experienced tragedies and even though I try so hard to have an attitude of gratitude, I know I still take life for granted sometimes. I think we all do.

It's unfortunate that sometimes it takes a horrible tragedy to remind me that tomorrow isn't promised.

So even though the bedtime routine last night was the same as every other night, I hugged Graham a little bit tighter and held him a little bit longer than I did the night before. And as I stared into his beautiful blue eyes, I counted my blessings and was thankful.

My thoughts and prayers are with those in Oklahoma.
Posted by Emily at 7:53 PM No comments:


Party in Graham's crib last night at 3:30 a.m. Those onesies have a whole new meaning to me now and I don't quite find them as humorous as I once did. When I went into his room to see what his deal was, he greeted me with a huge smile and continued to smile at me the entire time I changed his diaper. I think he really was hoping for a party.


And the "party" wasn't over until about 5 a.m. Needless to say, mamma and papa Robinson were a bit tired on this hump day. But I can't complain. Since he was six weeks old, this is only the third time we've been up in the middle of the night. He is a really good sleeper and I know we are lucky (although I'm convinced it isn't just about good luck. Sleep training must play some role, too. I highly recommend BabyWise and/or 12 hours sleep by 12 weeks old).


So why did he wake up? While of course we don't know for sure, we suspect it has something to do with the fact that it was 74+ degrees in his room and we had him dressed for a winter blizzard in long-sleeved, footed pajamas as well as wrapped in his swaddle blanket. In case you were wondering if we have aced this whole parenting thing since I last wrote, you just got your answer: Nope. We still have no idea what we're doing.

But we're still loving every second of this crazy ride. We signed Graham up for swimming lessons and have had three lessons so far. Each week I think he enjoys the water more. What is not to love about splashing water in your parents' faces? He might not make many friends in the pool if he keeps it up but we are so enjoying watching him have fun in the water. Summer should be really fun.

Since he is enjoying the water so much and sitting up so well, we decided maybe we should stop using his infant bather and let him sit and splash around in the tub. So I tried it. By myself. Not a good idea.

It was like sitting humpty dumpty in a tub and waiting for him to fall over. He was kicking and slipping and sliding all over the place. I was holding on to him for dear life, trying to prevent him from hitting his head on the porcelain or face planting into the water. Turns out, he's not quite ready to sit in the tub by himself. Lesson learned.

Sadly for me, I also found out that Graham has about the same tolerance for my shopping trips as his dad. The only difference is, Graham starts crying in the middle of the store and gets much quicker action than Pat does when he complains. This is the miracle Pat has been looking for and I wouldn't be surprised if the next time Pat is stuck shopping with me, he tries out the new trick.

After several months of making my own baby food, I finally sat down and did the math to see "how much money I was saving us." Much to my dismay, I found that in several instances not only am I not saving us money from the store-bought baby food, but I am actually costing us more. I was pretty darn deflated after finding this out. 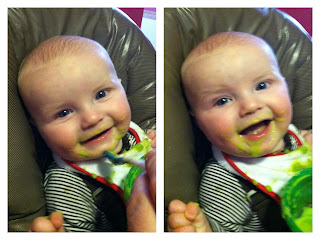 In hindsight, I really should have done the math before spending hours in the kitchen making baby food. But as I've been saying over and over again for the last (almost) seven months, live and learn. I plan to write a blog about all that I've learned (some the hard way) on the baby food making journey. Stay tuned.

Graham is almost seven months old and still has no teeth (or hair). As for the hair, I think Graham already has more than I did on my first birthday. I knew we would have bald babies. As for the teeth, my mom said my siblings and I all got our teeth late - around eight months - so maybe Graham will be the same. But given my dental history, Pat is more concerned about whether or not Graham will even have all of his teeth. Isn't he sweet?

No, he really is. I don't know what I would do without him or how single mothers do it. Pat is truly wonderful. Yes, he may not wash the bottles as thoroughly as I would and continues to use dryer sheets with Graham's laundry even though I have asked him not to, but I know I am pretty darn lucky to have a husband who works long hours and even though he's tired when he gets home he's still excited to play with his son (and see me) and helps out a ton around the house. And by "helps out" I mean he does more housework than I do.

I really think I got the better end of this whole marriage deal but for some reason, Pat thinks he's lucky, too. Not a day goes by that I don't reflect on how happy and blessed I am. I absolutely love our little family, chaos and all. 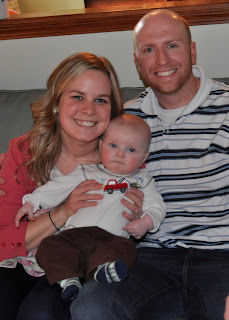