Graham is two months old now and he gets cuter every day, in my (not so) humble opinion. A lot has happened over the last two months and I'm not sure where to start.

Let's start with his sleeping habits. I told myself I would transition him to his crib at four weeks. Well four weeks came along and he was still sleeping in our room and I just wasn't ready to move him yet. Not only was he still in our room, but do you remember how I referenced keeping my bedside lamp on that first night we were home from the hospital?

Well, I must confess that it wasn't just a one night thing but instead I kept that light on every night for the entire first month of Graham's life. I know, I'm nuts. But it just made me feel more comfortable being able to roll over and see his face. And it wasn't that bright of a light.

I have good news. One night I decided it was time to start sleeping in the dark. But that seemed a little too drastic so I switched to only turning on the frog nightlight that we got at our baby shower. I LOVE the frog light which projects stars on our ceiling and gives me just enough light that I can still see his face and then it goes off after about twenty minutes when I'm already asleep.

(This is just one of the many baby items I've grown to love. Stay tuned for my "favorite baby items" blog that will be coming up next...perhaps next month at this rate)

So his nap sleeping habits aren't exactly awesome but his nighttime sleeping habits sure are! At exactly six weeks old, he slept through the night for the first time. I thought maybe it was a fluke but he did the same the next night, and the night after that and the night after that... You get the idea. But then I got really nervous because he was still sleeping in our room at that point and I thought maybe he wouldn't sleep through the night when we moved him to his crib.

So last Friday, when he was eight weeks old, we finally made the big move to his crib. I may have teared up a little bit. My baby is growing up. First you move them to their crib and the next thing you know you're moving them to college.

Well my fears were all for nothing because he slept soundly through his first night in the crib. I, however, slept horribly. I kept zooming the video monitor (another favorite item) in on his chest to make sure he was breathing. Don't judge me. I already admitted that I am crazy.

And he's been sleeping soundly in his crib every night since. Last night marked one full week of him sleeping in his crib and three weeks of sleeping through the night. Yes, I'm crazy. But I'll tell you what, I'm a whole lot less crazy when I'm getting sleep. That being said, I'm still not sleeping quite as long as Graham is because I pump after I put him to bed and then I wake up to pump before he wakes up in the morning.

About the whole pumping issue. It has been a daily battle. Some days I think, "This isn't so bad. I can definitely keep doing this until he's six months old and starts eating solids." Then the next day, I tell Pat that I'm going to quit pumping because it's overwhelming and keeping me from being a good mom. Lucky for me, he is completely supportive no matter what I decide and actually has been suggesting that I quit pumping for quite some time now.

You may not know this about me, but I'm extremely goal-oriented (my nice way of saying that I'm really stubborn). And when I put my mind to something, I have a really hard time giving up or quitting. Being a parent is teaching me that having a plan is nice but a much more effective plan is accepting that nothing with parenting really goes as planned.

Well, this whole breastfeeding and pumping issue has not quite gone as planned. I had visions of breastfeeding for six months and pumping after breastfeeding to store enough milk to give him breast milk for a full year. I was so confident about how much extra milk I would be producing that I actually had been looking for extra refrigerators on Craig's List to store the abundance of milk I was going to have.

So imagine my surprise to find out that I really didn't have a milk supply at all and was starving my child by trying to breastfeed. But I worked really hard, pumping at least eight times a day, sometimes for an hour at a time, even when I was only producing an ounce total at each session. My hard work paid off and my milk supply is up from almost nothing to now producing as much as he's eating each day (about 30 ounces).

So you can imagine why it's difficult for me to just quit now. When I reach a breaking point and tell myself that I'm going to quit pumping, and try to convince myself that it is OKAY if I quit, I can't let myself. I worked too hard to stop now.

So on the day that Pat was outside, I was attached to the pumping machine and Graham started crying, I told myself I was quitting for good that day so that I would be able to pick up my son when he needed me.

But instead of just quitting, I decided I would cut back and be more relaxed about pumping to see if that would make me feel better. Before doing this, I had to accept the fact that it might deplete my milk supply if I wasn't pumping as much.

Well, I cut back a few weeks ago and am now only pumping five times a day as opposed to eight and I'm producing the same amount of milk and it's much less stressful. Best case scenario, right?

I'm extremely proud of the fact that I had barely any milk to begin with and have now given Graham exactly nine weeks of breast milk and have almost 250 ounces of milk in the freezer. Turns out, we're going to need that extra freezer space after all!

I look at him in complete awe of the fact that Pat and I made him and what a miracle he is. Exactly one year ago, I was sitting at home recovering from a miscarriage, wondering when I would get pregnant again and if the next pregnancy would "stick," as they say.

I pretty much had ruled out the chance that I would have a baby in 2012 and here I am a year later, with a happy, healthy two month old baby. How could I not get overwhelmed with how blessed I am?

The biggest lesson I learned this month is that you never really have this whole parenting thing figured out. Just when you think you've got something figured out - it changes. It definitely keeps me on my toes and sometimes it can be stressful and overwhelming but I can't imagine my life any other way. 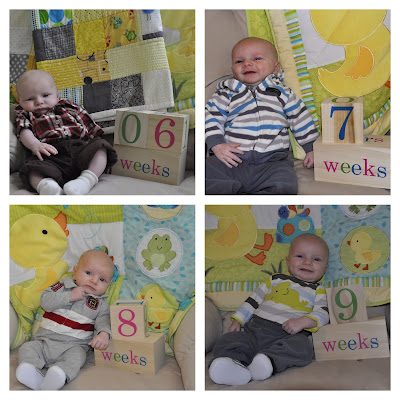 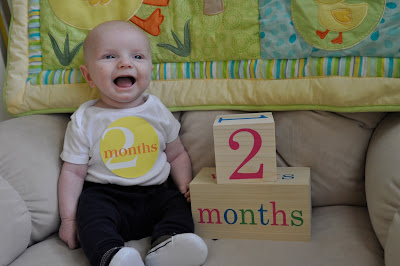