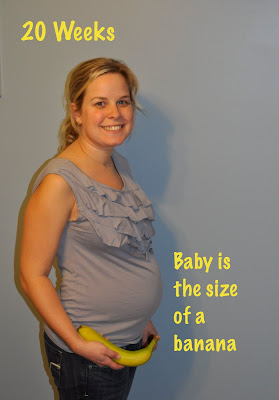 Half way there! It's very hard to believe. And a lot has happened this week.

They have gotten so strong, in fact, that Pat got to feel his first kick on Friday! It was so exciting and fun for both of us. He has been able to feel it a few times since then, too. Baby is most active after 10 p.m. at night (a habit we hope to break as soon as it's born!). Pat describes the movements to feel like muscle spasms. He's not far off. That's kind of what it feels like from the inside, too.

A few weeks ago, Pat asked me "when are you going to start 'nesting'?" which was his not-so-discreet attempt to find out when I would get the desire to start cleaning and organizing our house. I didn't think nesting was something that really happened. Especially not to people like me who could find any excuse in the world not to clean (if you want me to clean my house - call me and tell me you're coming over or ask me to throw a party).

But here I am, halfway through the pregnancy and the nesting kicked in. I worked my butt off (unfortunately not literally) over the long holiday weekend to start getting organized for this baby. It was nice to finally acknowledge that we do have a baby coming and we have a lot of work to do to get our house ready. Pat was soon begging for mercy and wishing the nesting would have never kicked in because a lot of my organizing and cleaning involved him. :) Ask and you shall receive, dear husband of mine.

But something even more unusual for me than a desire to clean and organize, is a desire to throw things away. I'm a pack rat. It's in my genes. But this weekend, all I wanted to do was throw things away. And Pat couldn't have been happier about that! In fact, instead of cleaning my messy scrapbooking room to make space for our office furniture, I was quite tempted to just throw it all away. I didn't of course, but I considered it.

So not only did we get our house on the path to being clean and organized, I also started buying things for the nursery. I bought the dresser (a craig's list find that we plan to sand and paint), the crib and crib mattress. It feels so good to have all of these big things done.

And since life is full of compromise, I didn't splurge on the crib and dresser like I wanted to (Pat wanted to spend the least amount of money possible). So I found the used dresser and got the cheapest consumer rated crib on the list instead. In the end, I think Pat is right about this one and in the long run, I will be glad we didn't spend a ton of extra money on this stuff. There, I said it Pat; you were right (for now.. until the crib falls apart...). But really, even when you go the cheap route, just preparing for a baby is EXPENSIVE !Can't image how much it costs once they get here!

I had my monthly doctor's appointment this week and Pat and I both couldn't help but notice how the tone of these appointments is starting to change. At first it was all fun and games and lots of laughter during the appointments. Although there was still laughter this time, too, it was more of an awkward obligatory laughter on my part when he started throwing terms around like "your baby is measuring big" and "you might have a big baby on your hands."

My all-time favorite quote from the appointment was when he said, "Sleep now. After the baby comes you'll be asking yourself 'what the heck was I thinking?'" As Pat put it, it seems like our doctor went from answering our questions to now, bracing us for impact. I was also informed that I've gained too much weight and that if I want to be able to push this baby out (which I do) I must stay away from the sweets.

Normally this would not be a problem for me. Give me the chips and dip and we'll call it even. But ever sine I've been growing this life inside of me, I can't pass up any dessert you put in front of me. I don't think it's fair that this is only affecting me - you already took away my drinking privileges, now sweets too? If that's the case, Pat is going down with me. So we made a pact. Neither of us will eat sweets - except on Sunday - for the remainder of the pregnancy. We will see how that goes...

Pat and I also celebrated our three year wedding anniversary this week. It's hard to believe we've been married three years and together for six and a half. I can honestly say it gets better every day - except when he's telling me to stop eating sweets. But really, I feel so lucky to have him and I'm so thankful that with all of the uncertainty that lies ahead for us when it comes to parenting, I can be sure of one thing; our child is going to grow up in a home with parents who love each other. 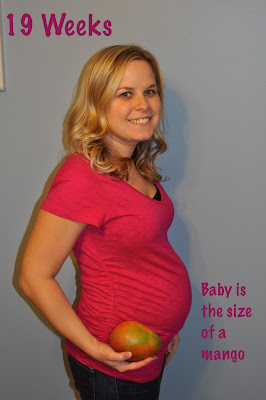 I still can't pass up desserts and don't worry - I didn't pass on anything this week, as much as I should have. I ate a glazed doughnut, piece of chocolate cake (it was small...) and a piece of cheesecake. Not all in the same day, but in the same week.

Other than my poor eating habits, which is old news at this point, there were a few other big developments this week.

I guess you could say I officially "popped." I received more comments (and more belly touching) this week than I have throughout the pregnancy. This is both good and bad. I kind of liked being able to "hide" my pregnancy and only talk about it when and with whom I wanted. Those days are officially behind me and my protruding belly apparently is just screaming to people, "yes, I'm pregnant. Let's talk about it."

There are only two weeks left of school and I almost made it through the year without the entire student body noticing I was pregnant, but this week gave it away.

I could hear random students whispering about me everywhere I went. "Is she pregnant?" they would ask each other. Others would actually come up and ask me directly. They all want to touch the belly - most of them ask first - and they expect to feel the baby moving. I try to explain to them that I can barely feel it moving at this point and then they make funny comments like "Oh, I guess it's not developed yet."

They all want to know if I'm having a boy or a girl. When I tell them we're not finding out, they scream out in agony and act like I am doing it just to torture them. Oh, and they all want me to name the baby after them.

Also in week 19, I discovered that I can't sleep on my stomach anymore. My body made it very obvious when I went to lay on my stomach and it felt like I was laying on a basketball. I guess I'm lucky I made it this far, but I am sure going to miss it. I didn't realize how much I actually slept on my stomach until I can't anymore. So long, comfortable sleep. Looking forward to seeing you again in October. Oh wait, I will have a newborn then. Looking forward to seeing you in 18 years?

I also have to sleep with a pillow in between my legs now. Not a big deal but not something I ever anticipated needing to do. But it is much more comfortable than without. And it gives what used to be an awkwardly cylinder shaped throw pillow that never got much use since I never make my bed, a new sense of purpose.

I'm no longer able to button my pants. At all. I've been getting by the last month with only buttoning one of the buttons on my pants but I can't do that anymore. This is unfortunate since I haven't purchased any maternity pants yet and really do not wish to until the fall.

One of the perks of working in a school is that I can dress casually in the summer. There are only two weeks of school left so I'm trying to hold out on buying clothes since I won't need them much longer (until the students come back in August - but we'll cross that bridge when we get there).

My SIL was nice enough to loan me her maternity clothes and this collection included a belly band. I was skeptical of this item at first, but when forced to try it this week, I am officially on the belly band-wagon (get it?). This little invention is awesome and I'm only jealous I couldn't have been the one to come up with it. If you've never seen or heard of one before - here is a picture.

Basically it holds your pants up even when you can't button them. In my opinion, this is a much better alternative to shelling out money on maternity pants that you won't even be wearing for very long and which are - let's face it - very unattractive.

Not that I'm claiming this belly band is attractive either. And it's hot. My belly sweats in it. But I still think it's great and is worth the extra heat and sweat. So far, it's been a lifesaver (and a money saver) and I give it two thumbs up. Plus, it just looks like you're wearing a tank top under your shirt if it does happen to stick out.

Those who know me well, knew this day was coming. I've never been a portrait of bladder control. But I honestly thought I would at least make it to the third trimestser before it happened. There were several factors that came into play.

My third mistake was spending 60 long seconds contemplating whether or not at 19 weeks I qualify for the "expectant mothers" parking spot at Giant Eagle. I decided I did not, even though I was seconds away from peeing my pants, and took a spot in the back of the parking lot.

My fourth and perhaps biggest mistake was assuming I knew where the bathrooms were located, even though our Giant Eagle has recently undergone mass construction and rearranging. When I arrived in the location where the bathrooms used to be and didn't see them, I started to panic.

I ran waddled over to the bag boy and asked him where the restrooms were now located. He pointed in the opposite direction and said "all the way down there." That's when I knew I was doomed. I tried to calm myself down, think about anything else, walk a perfect balance between not too fast and not too slow but it didn't matter. It wasn't fast enough.

And if you think that just because I peed my pants, I didn't proceed with my grocery shopping, you are wrong. I went to Giant Eagle for the mango (pictured above) and I wasn't leaving without it. I guess you could say I swapped the mango for my dignity.
Posted by Emily at 9:17 PM 4 comments: