The s#*t you argue about when you have kids

I vaguely remember what life was like before kids. I think I used to be fun, though. And I think I had a lot of energy. But it's so blurry. Anyway, I am quite confident that before we became parents, my husband and I used to have a lot of thought-provoking conversations that didn't revolve around poop. 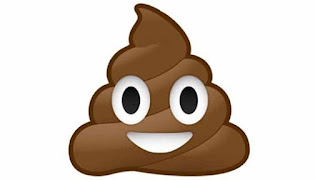 Yes, I am pretty sure that before we had kids, poop was not the #1 topic of conversation in our house. But from the moment we became parents, we talk about poop as casually as we talk about the weather. What it looks like, what it smells like, etc.

Before kids, I was definitely aware that Pat pooped quite frequently and that he spent a lot of time in the bathroom.

I always knew that when he disappeared for long periods of time, he was "taking care of business," as he likes to call it. After he got a smartphone, I think his time spent in the bathroom probably doubled. 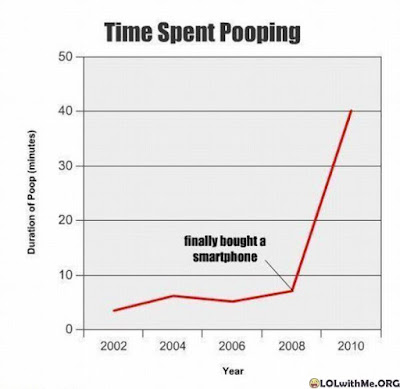 Before we had kids, though, I didn't care. I definitely didn't understand it, because women are just so much more efficient at going to the bathroom, but I didn't care.

But now that we have two kids, and I am outnumbered when I am alone with them, I am painfully aware when he disappears for 20+ minutes at a time FOUR TIMES A DAY. That is not an exaggeration, by the way. He poops four times a day. Is that even healthy? It seems ridiculous to poop that much but he assures me he is just regular.

He spends so much time in the bathroom that sometimes when he's not home and the bathroom door is closed, our kids go over to the door and call for him, assuming he's in there because he usually is.

They go to the door and call for him when he IS in there, too. If he forgets to lock the door, they open it. And if the door is locked, they pound on the door and yell for him to open it. He doesn't particularly enjoy this. And we argue about it every weekend.

Pat feels as though he should be able to "poop in peace" without our kids bothering him. It drives him crazy. I think he feels as though I should be keeping them away from the bathroom when he's in there. I'm not sure how I would do this since they don't listen to a dang word I say, but I guess he thinks I should try. 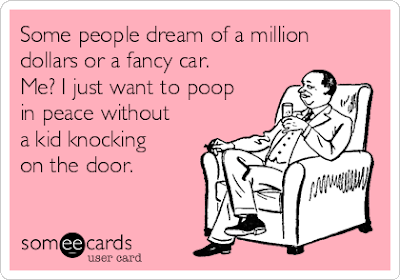 And I really don't try. Sometimes I might half-heartedly say, "let's leave daddy alone while he goes to the bathroom." But that's about it. I don't really try to enforce it.

To be fair, he usually gets the first 10 minutes or so in the bathroom to "poop in peace." That is about how long it takes for our kids to realize he is gone. So if he could just "take care of his business" a little faster, we wouldn't have a problem.

I feel like there are a lot of sacrifices we have to make when we become parents. Maybe becoming a faster pooper might be one that he has to make. I have made sacrifices, too. I could NEVER disappear for 10 minutes to "poop in peace." I can't even poop with the door shut. 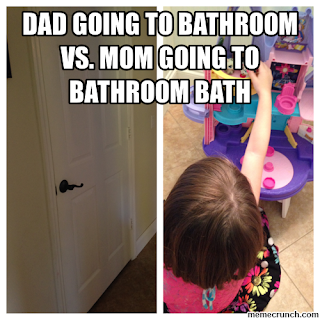 Usually I am too afraid to shut it, in fear of what my son might do to his little sister. But on the rare occasion that I do close the door, they just open it anyway so what's the point? And more times than not, one or both of them are actually in the bathroom with me. Sometimes, I actually have to go with Addy sitting on my lap so that I don't have to hear her screaming and crying to be picked up.

That is my definition of "pooping in peace." Pooping with my daughter sitting on my lap so that I don't have to hear her crying in the tiny bathroom where her screams sound 100x louder. And pooping while I watch my son fill up the sink with water, wasting all of our soap, knowing that I can't do anything about it except use my words to try to get him to stop, which we both know will have zero impact.

So you can see why when it comes to Pat wanting to "poop in peace," I have zero sympathy for him.

I vaguely remember blogging before I had kids but I am pretty sure I never blogged about poop. But yet, here I am. Ain't that some S#@t.

After getting the kids to bed last night, I sat down to blog for the first time in eight months.

I fell asleep sitting up at the computer five minutes later.

#reallife
Posted by Emily at 9:22 AM No comments: