Did you brave the crowds on Black Friday? We were driving home from my inlaw's around 11:30 p.m. on Thanksgiving night and couldn't believe all the people we saw lined up outside of the stores. Thanksgiving night was pretty cold, too, I might add.

I'm not here to judge anyone who shops on Black Friday because I can appreciate a good deal with the best of them. That being said, the picture the media paints of this day is pretty much like my worst nightmare. I hate crowded places, long lines and mean people. I saw the news reports about all of the Black Friday fights and violence, which only confirmed the negative picture in my mind about this shopping experience.

So instead of dealing with the crowds on Black Friday, we decided to take advantage of the unusually warm day and hang our Christmas lights. And by "we," I mean, Pat does all the work and I just hold the ladder. Someone has to do it, right? As we were testing the lights, though, we realized each strand was half broken. After I finished kicking myself for not buying lights after Christmas last year when they were 50% off, we ventured out into the craziness that was Black Friday.

Pat went to Home Depot to get more lights and I went to JoAnn fabrics for scrapbooking paper to start my Christmas cards. The line was longer than I have ever seen there! I was instantly regretting my decision to go there until I realized the frames were on sale for 65% off. That is a HUGE deal and I was in the market for some frames. A few months ago, I pinned this on Pinterest.


I received a wooden letter R for Christmas last year and have been waiting for the perfect way and place to hang it. As always, Pinterst gave me a great idea and solution.

So when I saw the frames were on sale for 65%, I jumped at the chance to finally make this project happen. My one and only Black Friday purchase provided my once bare wall with this new decor.

I'm very pleased with the way it turned out. And the best part? I saved $60! Lucky for me, even though JoAnn was pretty busy, they had every cash register open and the line went super fast. It was a painless and productive shopping trip that didn't result in me getting sprayed with pepper spray. That's my kind of Black Friday shopping.
Posted by Emily at 10:10 PM No comments:

A day in the life of a Viking

For a long time now, the admissions director and I have been talking about getting a mascot for the high school where we work. All schools need a mascot, right? So we found a Viking mascot costume and ordered it a few weeks ago. The mascot came in the mail yesterday and as we were opening it in my office, I decided to try the head on. One thing led to another and before I knew it, I was wearing the entire costume. 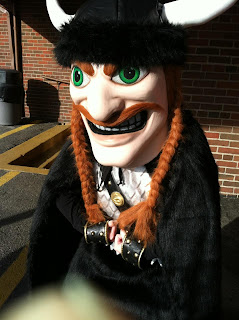 Laughing hysterically at me, the admissions director dared me to walk down the hallway in the mascot costume. To clarify, I asked her if it was a triple dog dare and she said yes. What else could I do? I never pass up triple dog dares. So I did it. Class was in session so there weren't a lot of kids in the hallways but the faculty and staff that we did run in to, were really enjoying the mascot. No one really knew it was me in there which I thought was even more fun.

At this point, school was going to dismiss in twenty minutes so we decided maybe it would be a good idea for me to stay in the costume and walk around the hallways to generate interest in auditioning for the role of mascot. I was really enjoying wearing it so I thought, what's thirty more minutes in it? I had no idea what I was getting myself into.

In a matter of ten minutes, I was almost tackled, manhandled, punched, flicked, had candy thrown at my face and suffered multiple attempts to be de-masked. I had no idea how much mascots bring out the very worst in people. Looking back, keeping my identity a secret while walking the halls in the mascot costume was not one of my better ideas. Most if not all of the students would have never treated me that way if they knew it was a staff member under the mask. For example, the girl who threw skittles at my face and punched me, when I finally yelled at her to "stop touching me," she immediately knew I was an adult and ran away. 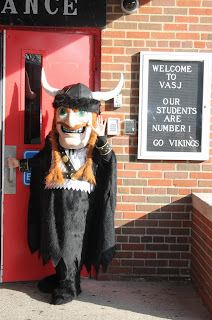 Don't get me wrong, there were a lot of fun moments wearing the mascot, too. For example, when one student thought for sure they had figured out who was in the costume and then that person walked up next to them and they were totally confused. I also really enjoyed the students who were scared of the costume. Some students figured out it was me by my small hands and my "mannerisms." They said I walk and act a certain way (who knew?). But even when they were saying this, they still weren't 100% sure if they were right and that was really fun.

But overall, it was awful. I have a new respect for mascots that I never really appreciated before, including my brother-in-law who was Goofy and various other characters during his internship at Disney. I'm thinking about starting a support group. One thing is for sure, I will not be stepping foot in that Viking costume ever again.

Please remember, mascots have feelings, too.
Posted by Emily at 11:01 AM No comments:

At work today, I received an email with an article titled, "21 signs you grew up in the 90s."  It was really funny and made me laugh out loud which was refreshing after a long week. I enjoyed number 12 the most, "How to get a Furby or Tamagotchi to shut up."

If I had to add a few things of my own, I would add:
It was quite ironic after reading this article about things from the 90s that I would come home after work to my husband sitting on our exercise ball in front of the TV, surrounded by an original Nintendo and a ton of cords and games. He was so excited I was home and couldn't wait to tell me what he was up to. "Guess what I got up and running? My old Nintendo from my parents. I thought we could have a happy hour game night."

My lack of excitement was utterly disappointing to him. He was really hoping that we could sit down together and enjoy some Tecmo Bowl and drink some beers. Just like the good old days. Well, minus the beer of course. Or maybe not?

But the truth is, I was never that into Nintendo. First of all, we weren't allowed to own one. When we did finally get one it wasn't until the rest of the world had moved on to Nintendo 2 and no one wanted their original Nintendos anymore. So my sister and I bought a Nintendo ourselves at a garage sale. Even then, I wasn't good at it and I hated the fact that two people couldn't play at once. These kids today don't realize how lucky they are to play games simultaneously with one another. I feel like I spent most of my time waiting for my turn. When I was finally up, my sister would encourage me to "follow the mushrooms down the hole" and I would die instantly and go back to waiting for my turn again.

Tonight was no exception. After seeing how disappointed Pat was with my lack of interest, I decided to sit down and give it a try. Besides, maybe I would be better with some liquid courage. Negative. Pat's disappointed with my lack of interest soon transferred into a disappointment with my lack of talent at video games. After a few rounds of losing right away in Paper Boy (how realistic is that game anyway? Seriously, tornadoes and the grim reaper come out of nowhere and kill you), I gave up on game night and instead curled up on the couch with our dog, who as it turns out, is absolutely terrified of the Nintendo. He doesn't like the noises it makes and he doesn't like all the foreign objects on the living room floor. I've never claimed he was brave. 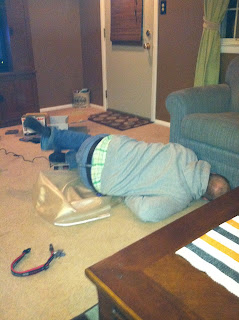 As I sat on the couch, watching Pat in all of his glory, bobbing his head to the music of Tyson's Punch Out, game night in the Robinson household quickly came to an end with a bang. Literally. This photo was taken moments after the exercise ball popped while Pat was sitting on it playing Nintendo. When it broke, Pat crashed to the floor landing directly on one of the points of Grady's deer antler. I'm probably not going to win any wife of the year awards for first taking a picture of him laying on the ground screaming in pain before ever asking if he was okay.

When he did finally get himself up off the ground, his only words were, "This is the worst game night ever." Not yet willing to give up on game night, though, Pat went to retrieve a dining room chair to replace the exercise ball and ended up spilling his beer in the process. And just when he thought things couldn't get worse, the game started to freeze. After several attempts to fix it (by taking it out and blowing in it - we all remember the routine), Pat, completely defeated in all aspects of the word, finally called it quits on game night. I believe deep down he blames me for all of the negative events that took place this evening. After all, it was my bad attitude about Nintendo game night that "set the tone," as he said, for the rest of the evening.

When I think about tonight's events, once I'm able to stop laughing, I feel kind of bad for the 28 year old Pat who so desperately wanted to relive the glory days of eight year old Pat when the only worries in life were building teams for backyard football and winning Nintendo games. But that only lasts for a second before I start thinking about the exercise ball popping and him falling to the ground and then I start laughing again.

Tomorrow, I'm not sure which will be more bruised; Pat's back or his pride.
Posted by Emily at 7:55 PM 2 comments: