I don't own any scuba gear

With the exception of super models, I don't think there is a woman on this planet who enjoys swimsuit season. I never have liked getting in a bathing suit but after birthing my second child five months ago, I am especially dreading it this year.

And since I don't own any scuba gear, which is the only thing I would currently be comfortable wearing to the beach, it is time for me to whip this post-baby body back into shape.

About a month ago I bought my new running shoes. I tried them on and then put them in my closet where they have been sitting ever since.

As it turns out, you have to actually run in them to see results. Who knew?

So I got them out of the closet today and took the tags off. Then I put them away again.

I did it. I ran today for the first time since becoming pregnant with Addy over a year ago. I have been nervous to start exercising because I am still nursing and it can decrease your milk supply which stinks.

But then I remember that I don't own scuba gear and again get motivated to start running.

So I downloaded the Couch to 5k app and hit the pavement. 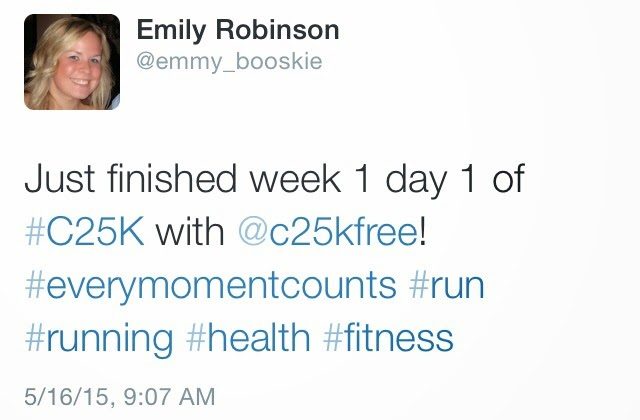 I ran (and walked) for twenty minutes. It wasn't pretty. In fact, it was downright ugly. And slow. Really slow. And within 20 seconds of starting to run I threw up in my mouth a little.

It felt really good though and I actually thought I was doing great. Got a little cocky, even. Until the lady said, "you are halfway." I know she was trying to be supportive but I still wanted to punch her in the face.

My first post-baby run is in the books. I am hesistant to use the word "run" because I think it implies something much faster than I am actually capable of. It is more of a slow jog. Or even a fast walk by some standards.

I finished, though, and that was what I set out to do. I just want to fit into my old clothes again. My fat summer wardrobe came in the mail yesterday. The fact that I had to buy a second wardrobe for the summer was even more motivation to get out there and start running again.

That and the fact that I am running my work's 5k in exactly eight weeks from today.

And I don't own any scuba gear.

I did take a before picture but I am going to wait and share it when there is an after picture to go with it. Wimpy, I know, but it's my blog and I get to make up my own rules. :)