No one likes sour jugs

If you read my blog often, you know that my husband Pat is usually my favorite topic of discussion. Whether it be his refusal to read the labels on my clothes and his insistence on washing all colors together and then throwing them in the dryer on high, or the fact that after living in our house for 2 1/2 years he still can't catch on to the routine of making sure the shower curtain is pulled closed; he provides a lot of material for me to use in this blog. But tonight, I'm reprieving Pat of his role as the victim of my blog and instead I'm going to talk about myself.

When I got home from Dale Carnegie class tonight at 10:00 p.m., Pat saved me food because he knew I didn't eat dinner. He heated it up for me and served me at the table. What a husband I have! Then, in a very soft, polite voice he said, "Emily? Can I ask you favor?" I wish I could say I responded with, "Yes, dear. Anything you want." But actually, I was busy facebooking so even though I heard the question, I wasn't really listening so I didn't respond at all. He asked the question again, still polite but not quite as softly as the first time, "Em...can I ask you a favor?" This time I did answer with, "Of course!" 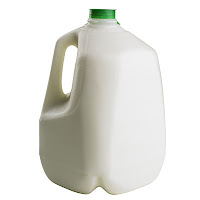 His request seemed simple and almost silly to me at first. He asked that if I'm the one to finish off a gallon of milk, that I rinse it out and crush it rather than leave it on the counter for him to take care of, which I thought was a perfect strategy, by the way. So I said, yes, I can do that but I still didn't think it was that big of a deal if I just left it on the counter, just as he doesn't see the big deal about shrinking my favorite and worn only once Anne Taylor Loft sweater (I swear, I am not bitter about that AT ALL). He must have been able to read my nonverbals because he proceeded to explain to me why this was important to him.

Tonight, while I was at class, Pat was so kindly cleaning our kitchen - which I appreciate VERY much. He started to collect the recyclables and noticed the empty milk jug, right where I left it for him on the counter. Assuming I had already rinsed it out, which I guess is standard procedure for recycling milk jugs (who knew?), he went to smash it and was immediately gagging as the overwhelming odor from the sour milk that was left in the bottom of the jug blew into his face.

I wasn't showing the sympathetic reaction he was probably looking for when I was laughing hysterically in his sour face - pun intended. But once I gained my composure, I recognized how very unpleasant that experience must have been for him and how very unhappy I would have been had it happened to me.

So I learned something tonight. After 27 years of thinking I'm perfect (hardy har har), tonight I was in for a rude awakening when Pat brought to my intention that I am in fact, not perfect. I have one flaw and one flaw only...that I do not rinse and crush our empty milk jugs. Noted. I'm off to take a shower where I can assure you I will immediately close the shower curtain when I'm finished! :)
Posted by Emily at 10:37 PM

Emily - this is hysterical! Did you tell pat that the milk was getting back at him for all the years that he spilled milk @ the dinner table! AHAHHAHAHAHAHHAHAHAHAH!!!!!!!!!!!

It drives me CRAZY when Justin doesn't close the shower curtain. I have to side with Pat though on the laundry. I'm such a boy about it---I throw everything in together (including towels) and always run the dryer on high. The only exception is with ALL my dress close that get thrown into a different hamper and washed on delicate. I do all the laundry though, so I guess I don't have to worry about Justin messing up one of my favorite sweaters!

I also laughed hysterically about the sour milk blowing into his face!